Serving as a Juror 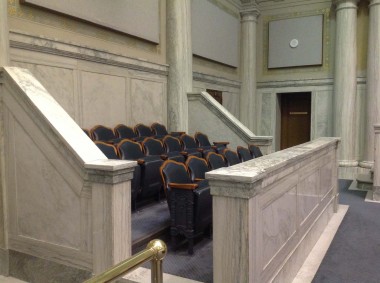 Trial by jury is one of the cornerstones of our legal system. In Manitoba, jury trials take place in the Court of Queen's Bench. Most jury trials are criminal cases, but there can be jury trials in civil cases of defamation, false imprisonment, malicious prosecution and malicious arrest. A jury in a civil trial is made up of six jurors and the selection process is the same for a jury in a criminal case.

Watch a video about the Jury Selection Process

Jury selection begins with the random selection of a group of 48 or more residents from a judicial district (this is called the Jury Panel). These persons are sent a summons or notice to attend court. Under the supervision of a judge of the Court of Queen's Bench, a twelve-member jury (required for each criminal trial) is selected from this panel by the counsel representing the Crown and the accused (the defence). This is done by calling numbers at random from a box of cards listing all members of the jury panel. When called, each juror is asked to attend at the jury box in the courtroom.

Either Crown or the defence may object to any person serving as a juror at the trial if they believe that circumstances exist which would disqualify them. This is called a challenge for cause. Such a challenge may be employed if either the Crown or the defence thinks a person holds some views on the matters to be presented at the trial which might influence their decision on the guilt or innocence of the accused.

Qualification as a Juror

As stated previously, prospective jurors are selected at random from judicial districts. A juror requires no formal knowledge or experience of the law. The only requirements are that the juror is over the age of eighteen and is a resident of Manitoba. However, there are certain people who cannot be jurors as set out in The Jury Act. Those persons are:

Eligibility to serve as a juror

Persons with disabilities may serve on juries provided the disability can be reasonably accommodated to allow for proper discharge of a juror’s duty. If a person seeks an exemption on the basis of a disability when an accommodation is available, they may be required to provide a certificate or letter from their medical practitioner to explain how the disability may impact the person’s ability to serve.

The judge begins the trial with instructions and general information for the jury, explaining the jurors' role as triers of the facts. The judge and no one else can instruct the jurors in their duties at the trial. Like all trials, there are opening statements. In criminal cases, the Crown Attorney opens with the case for the Crown (the prosecution). This involves a statement about the offence the accused is charged with, what the Crown intends to prove and how the evidence will be presented. This opening statement is not evidence, it is made only to assist the judge and jury in following the evidence that will be presented. When the Crown's case is completed, the defence may also present evidence to the court. In the course of a trial, there may be objections raised by the counsel to questions or answers during the examination and cross-examination of witnesses. The judge will rule on the objections and give the jury instructions where necessary. These objections are based on the law of evidence which is designed to ensure a jury's decision is based upon legally relevant evidence.

In a criminal trial, the jury may be asked to leave the courtroom to permit technical arguments on a legal point. Such a process is called a voir dire. Having the jury absent from the courtroom during the voir dire preserves their impartiality. After all testimony and evidence has been presented to the court, each counsel sums up their case for the jury. Like the opening statement, the summation is not evidence but may assist the jurors in their understanding of the evidence and the issues of the case.

The Charge to the Jury

Following the summations by counsel, the judge gives the jury precise instructions about the law that must be applied to the case. The judge outlines the facts the Crown must prove in order to establish the guilt of the accused, and advises jurors of the duties they must carry out when they leave the courtroom to consider their verdict (deliberation). This is called charging the jury.

At the end of the jury charge, the case is in the hands of the jury and the jury leaves the courtroom to the jury room to deliberate. The jury chooses a foreperson, reviews the evidence and reaches a verdict in accordance with the instructions of the judge. If the jury requires further instruction or clarification of some point, it may contact the judge, who takes appropriate action. Once the jury has withdrawn to consider its verdict, members of the jury may not communicate with anyone outside of the jury room except jury ushers and then only for the purpose of contacting the judge. In a criminal trial, the verdict in a case can only be reached by the complete or unanimous agreement of the 12 jurors. Their duty is finished and the judge will discharge them when the foreperson announces the jury's verdict in open court.

Each juror must evaluate the evidence independently. It is contempt of court for a jury to discuss any aspect of the trial with anyone other than another juror, or the trial judge. It is also an offence for anyone to attempt to communicate with a juror about the case. The Jury Act of Manitoba and the Criminal Code of Canada both prohibit a juror from discussing or disclosing the nature or the content of the jury deliberations not revealed in open court, even after the jury has been discharged.

Serving as a Juror - Leave from Employment

The Jury Act of Manitoba states that every employer must grant to an employee who is summoned to serve as a juror, a leave of absence from his or her employment. The leave of absence can be with or without pay. When the employee returns to work following jury duty, the employer must reinstate the employee to his or her position or a similar position with the same salary. An employer who fails to comply with this provision of The Jury Act is liable to the employee for any loss as a result of that failure. Further, it is an offence for an employer to directly or indirectly threaten to cause or causes an employee loss of position or employment or threaten to impose or impose on an employee any monetary or other penalty because of the employee being summoned for jury service.

Jurors will be paid a jury fee for each day they serve in a trial.

Information on this page last updated on August 23, 2021