About the Provincial Court 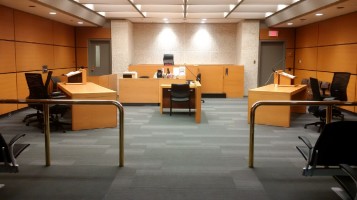 After an individual is charged, the Provincial Court hears applications for judicial interim release (bail), presides over intake (first appearance) courts, screening (resolution) courts, preliminary inquiries (to determine whether there is sufficient evidence to order an accused to stand trial), and various types of trial courts. The Provincial Court also hears all Youth Court cases in the Province of Manitoba.

In addition to cases under the Criminal Code and the Youth Criminal Justice Act, the Provincial Court hears cases under a variety of other federal statutes, such as: the Controlled Drugs and Substances Act, and hears all provincial statute cases, such as those under The Highway Traffic Act and The Liquor Control Act. The Court also presides over inquests under The Fatality Inquiries Act, and reviews alleged police misconduct under The Law Enforcement Review Act.

Provincial Court Judges are appointed by Order-in-Council of the Province of Manitoba upon the recommendation of a Judicial Nominating Committee comprised of the Chief Judge, three citizens appointed by the Government, the President of The Law Society, the President of the Manitoba Bar Association, and a representative of the Provincial Court judges.

Watch a video about the Manitoba Provincial Court

Information on this page last updated on June 18, 2021