An  historic unveiling ceremony for portraits of four former Chief Justices of Manitoba took place on Law Day, Sunday, April 13, 2014 on the second floor of The Law Courts.  The portraits are of:          The Honourable Richard... 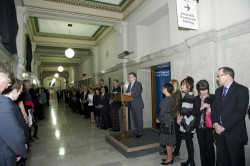 Decisions of Court of Appeal panels will now be posted on the website as soon as possible after the release date.  Decisions may also still be found free of charge at ...

New Judge appointed to the Court of Appeal

Information on this page last updated on January 16, 2014