The Old Law Courts Building was constructed between 1912 and 1916, during the same period as the Manitoba Legislature.  As a result, the Law Courts became embroiled in the political scandal surrounding the construction of the Legislature, resulting in a public inquiry in 1915.  The original contractor, Thomas Kelly, was sent to prison for overcharging the government almost $1 million.  The original architect for the Old Law Courts Building was Samuel Hooper, who died in 1911.  He was the provincial architect at the time.  After his death he was replaced by Victor W. Horwood, who was replaced, as a result of the Kelly scandal, by John D. Atchison. He was the provincial architect when the building was completed in 1916.  The 1912 building permit estimated the cost at $1 million.  An addition was built in 1914 at a cost of $155,000.  Great emphasis was placed on utilizing Canadian materials and workmanship. 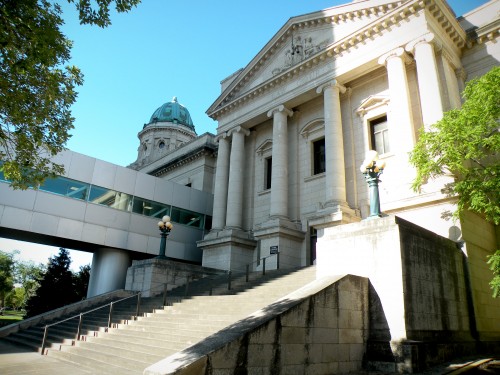 The Old Law Courts Building is primarily made from Manitoba limestone (quarried in Lyall (now Garson), Manitoba) and brick.  Marble (primarily grey Missisquoi marble from Philipsburg, Quebec) is present throughout the building, especially in Courtroom 210, which is believed to be one of the largest marble courtrooms in North America.  There are courtrooms on all three floors, primarily used by the Court of Queen’s Bench.  Court of Appeal hearings are held in Courtroom 330, while Court of Appeal Chambers proceedings are held in Courtroom 130.  Court of Appeal judges’ chambers are located on the first floor, while Court of Queen’s Bench judges’ chambers are located on the second floor, as well as throughout the Old Winnipeg Land Titles Building.  The Great Library, operated by the Law Society of Manitoba, is located on the third floor.

The New Law Courts Building was constructed between 1983 and 1987 by Kraft Construction at a cost of $15.5 million.  It has five floors.  The main floor houses the court offices and registries of the Court of Appeal, the Court of Queen’s Bench and the Provincial Court.  Offices of court administration and court clerks are located on the second floor.  The third and fourth floors house courtrooms primarily used by the Provincial Court of Manitoba, as well as Sheriff Services offices and the Sheriff Lock-Up for in-custody accused persons making appearances in the court complex.  On the fifth floor are the chambers for the Provincial Court Judges.

For further information regarding the Old Law Courts Building, see http://www.historicplaces.ca/en/rep-reg/place-lieu.aspx?id=12789 and http://www.mhs.mb.ca/docs/sites/winnipeglawcourts.shtml